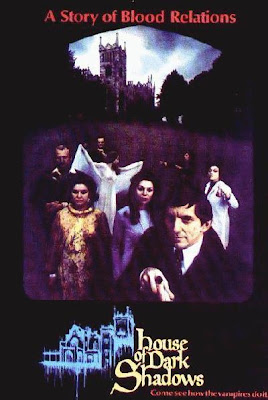 Although he is not generally considered to be an auteur, Dan Curtis is a filmmaker whose work is instantly recognizable. Part of this comes from his love of the zoom lens, his often hurried, chaotic staging, and the sudden stings of dramatic music by his usual composer Robert Colbert. All of it creates an atmosphere that immediately brings to mind the film and television of the early 1970s.

The soap opera Dark Shadows was Curtis' baby and it ran on ABC from 1966-1971 hitting the peak of its popularity with the release of this film in 1970. While the show had many long running storylines and even storylines in different eras, Curtis decided that the film version was going to tell the Barnabas vampire tale alone. Audiences were a bit shocked by how much harsher the film version of the show was, with a Barnabas that was much less sympathetic and violence that was, well, violent.

With a tightly focused vampire story, Curtis produced a film which has the feel of a classic Hammer film. This is ironic as the real Hammer Films had been struggling with a way to bring their gothic style into the modern era as evidenced by their early 70s failures Dracula A.D. 1972 and The Satanic Rites of Dracula. Curtis realized that it wasn't achieved by including blue jeans, nightclubs and airplanes but by drawing the story back into an insular world that is essentially timeless. The film is aided immeasurably in this regard by its location photography in upstate New York and Connecticut. It's a film of old cemetaries, large monasteries and country houses.

The biggest difference between the show and film is that the show often traded on a certain low rent charm. Cheap looking FX, wobbly sets, and actors who became lost in the dialogue. The film is well mounted and stylishly produced. In what must've seemed like a luxury, Jonathan Frid had time to learn ALL his lines.
Posted by Brian at 8:03 AM