THERE WILL BE BLOOD! 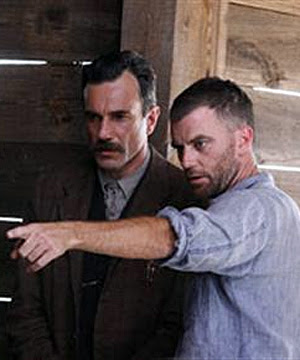 Coen brothers, Paul Thomas Anderson drinks YOUR milkshake! This is the best film of 2007. Hands down. It’s not a perfect film by any means but it comes about as close to perfection as Orson Welles did when he made that obscure biopic Citizen Kane.

Superficially, this belongs in the Kane genre. A character study/profile of a self-made man whose very ambition, greed, misanthropy and ego get the better of him, it’s also the story of the beginnings of corporate America and it’s shadowy reflection, corporate Christianity. The character of Daniel Plainview is meant to be many things at once, not the least himself and is one of the most vivid ever recorded on film. Larger than life, cartoonish and yet real as any nightmare, Plainview stalks across the screen with such clarity that he seems like he’s talking directly to you.

Anderson’s screenplay is a startling adaptation of Upton Sinclair’s 1927 novel Oil!. Another muckraking novel of corporate injustice like his more well known The Jungle, Oil! has been considerably altered by Anderson to concentrate less on digging up the political dirt than on the psychology and sheer existence of the kind of man who creates his own isolated empire.