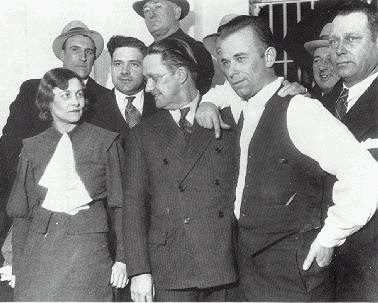 If you've ever seen the famous newsreel footage of John Dillinger under arrest but acting like a guest at an Awards ceremony, one arm resting on the shoulder of the DA, then you know that this was a unique man-one of the few with that cult of personality that makes a man likable even when his actions are dispicable.

What in the world was going on in that man's mind? Can a man about to be locked up and put on trial for robbery and murder be THAT confident and at ease among his captors?

Well, unfortunately we have to keep wondering since that man is not depicted in this film, the latest cops and robbers saga from director Michael Mann.

At first this seems to be a perfect meeting of raw material and filmmaker. The classic true story of Depression era bank robber and media celebrity John Dillinger (Johnny Depp) being pursued doggedly by straight arrowed G-man Melvin Purvis (Christian Bale) sounds like a piece of ready-made art for the director of HEAT and MIAMI VICE.

The trouble is that just adding water to the mix does not a masterpiece make. Not even good entertainment. Mann has consistently warred with his artistic instincts onscreen and this war has made for some great films. His sensibility is informed partly by the French existential crime melodrama as defined by the work of Jean-Pierre Melville but shadowed by the more direct and efficient crime films of classic American cinema, the lean and muscular films of directors like Don Siegel and Robert Aldrich. When he makes sure that his chocolate is not taking over his peanut butter or vice-versa you get a pop entertainment that seems deep and conjures up feelings and moods way outside of the confines of mere genre. Cop and criminal are both abstracted into wider symbols of mankind lost in a world beyond their comprehension. But don't worry there's gonna be a cool shootout soon.

Now, Mann has had a tendency to lose the plot at times. And I don't just mean the actual plot. In films like THE KEEP, the director seems to forget that he is making a film for popular consumption and completely vaporizes the audience under an avalanche of images pregnant with meaning. He also commits the unpardonable sin of avoiding obligatory scenes-those obvious scenes in drama which everyone can predict will be in the film and yet feel cheated without. This is the first mark of a filmmaker unable to control himself. If the film were purely an art construct then this would not be a problem, but PUBLIC ENEMIES clearly wants to engage the audience as much as it alienates them. So we get a script for an '80s HBO cable movie being directed by a filmmaker who detests its triteness. Something's got to give and here it's the characterization and narrative which fails to convince and fails to entrance.

What Mann gets right about the film has everything to do with its surface since that is where he is most comfortable as a filmmaker. If you ever wanted a Magical Mystery Tour through a 30s gangster fantasia, here it is. PUBLIC ENEMIES has tommy guns and they do rat-tat-tat. The costumes are so cool you know immediately what to do this Halloween. Mann shoots all this with a mix of big HD cameras and a few more akin to your own handycam to create an in your face, "COPS" styled journey through old timey clothes, weapons, cars, and architecture. You are THERE shooting it out with the police only inches away from Dillinger's gun.

This is all very effective. Mann also succeeds at presenting the pioneering methods of the FBI demonstrating early wire tapping and telephone book beatings without fanfare or comment. As always in a Mann film, there are powerful images that sear into your brain upon contact with your eyes. It's hard to forget the dying breath of a gangster seen as vapor in the night air. 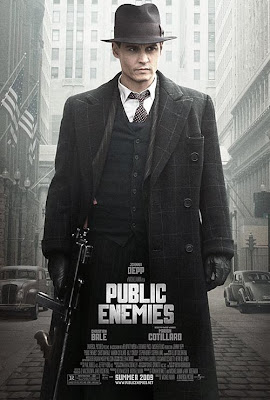 These are the primary tools within Mann's filmmaking toolbox. The characters and performances are another story. Outside of Stephen Lang's truly effective performance as Texas Ranger Charles Winstead, the acting is workmanlike. Lang finds a way of suggesting ideas and hidden emotions miles deep between his largely rhetorical dialogue in a way lost upon the rest of the cast. Christian Bale plays his stock character again-the ice cold and obsessed male struggling to hold onto what's left of his humanity. He plays it well and his Melvin Purvis works funtionally in the film. But nothing more.

Depp is all wrong for Dillinger and he should've been perfect. Depp is an actor capable of great onscreen charisma along with his skills for mimicry and movement. But the script does not portray the lively and bigger than life face that Dillinger displayed for the public but rather the dour and sphinx-like blank of the sociopath he probably was when alone. This would've been the best route-to display the movie star behavior in public contrasted with the emptiness in his privacy. But the film wants nothing to do with the legend of Dillinger and leaves us alone with his mannequin. We don't learn more about him through this choice and end up with a dead center in the middle of a bland procedural narrative.

What he finds so alluring in Billie Frechette (Marion Cotillard) is also up for argument. She's certainly pretty enough. But there's nothing about her that inspires as a character, nothing to define why someone like John Dillinger would risk everything to be near her.

Dillinger in real life was known to be a man who didn't like to plan far into the future. He lived for today, for now. Mann leaps upon this as some kind of "Rosebud" key and has Depp utter the philosophy onscreen. But he just utters it-doesn't express it as something important to his nature and is not given scenes in which to dramatize his carpe diem nature at all. He just seems reckless at times, overconfident rather than driven to live life to its fullest. Who was John Dillinger and why should we care about him enough to spend 2 plus hours watching this film?

This is the question that Mann and his co-writers should've been asking not me.
Posted by Brian at 3:50 PM 2 comments: