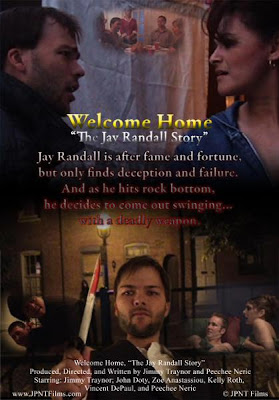 While the rest of the world complains about the sad state of indie film, Baltimore's Jimmy Traynor just gets on with it, making film after film in his own inimitable style. I'm not even sure if Traynor himself could boil his filmmaking down to any specific craft. But there is something almost intangible about the man's work that speaks clearly to that most mysterious and incalculable trait: talent.

Upon cursory examination, his films seem to be the product of carelessness. Scenes are loosely constructed from random shots that pan and zoom around for a subject lost at sea. Sound recording becomes more audible the closer the actor is to the camera. This is the camcorder aesthetic of birthday parties and bar mitvahs and would be easy to write off as nothing more than amateurishness were it not for the strangely arresting content. All of the "flaws" above are quickly forgotten as the action being covered proves to be so intriguing it could be filmed upside down from hundreds of feet away and still hold the attention. It soon becomes obvious that form is merely following function and that any surface slickness would prove detrimental to the whole.

Low or NO budget films are often given an energetic kick in the pants by simply having to be made on the run. There is no time to react intellectually and so something much more honest often results. Traynor has taken this model and made it his working method. Most of his films are done in a matter of two or three days. The films are shot so quickly that deliberation must give way to immediate decision. His latest film however, WELCOME HOME-THE JAY RANDALL STORY, was made in a somewhat different manner, with a script completed long before production and a shoot that lasted on and off over several years. The thing is that it doesn't appear to be that different from any of his other, more matter of fact work. This is rather amazing since filmmakers who are so improvisational often fall prey to pretentiousness when committing to a larger more conventionally designed project. Not so with Traynor whose latest film has as much crazy energy and just plain weirdness as any of his earlier work. In fact, WELCOME HOME may be his best film period.

Working with his co-writer/director Peechee Neric, Traynor stars in the film as Jay, a Baltimore actor with bigger dreams than talent who heads out to Hollywood to be a star. His delusions are his own since his friends and family are quite bitingly honest about his chances out there. Even his sister taunts him with a less than supportive, "You'll be back." The naive Jay gets schooled in the down and dirty ways of Hollywood and soon finds himself with no money, no friends and with no other option but to return home as the loser everyone predicted. Having to put up with his father's constant barrage of insults and the feeling that everyone is laughing behind his back, Jay loses his sanity and goes on a bloody rampage murdering all his critics the way many a filmmaker or actor has wanted to in theory.

Traynor is quite good as the slightly dim witted Jay and the film can be seen as either a comedy or tragedy depending on your point of view. It seems that Traynor and Neric find Jay both the butt of their cinematic joke as well as the focus of some real sadness and anger. It's this dark undercurrent that gives the film an added kick. Once the murder spree starts the film shifts gears from the sly, Hollywood satire of the early scenes into some surprisingly well staged schlock horror. But this is very self aware schlock with Jay indulging himself in the role of a lifetime, that of the vengeful madman in a classic late night horror picture. Logic is completely suspended as we experience the film the way Jay sees it. While the ending of the film wasn't anything groundbreaking, it was oddly shocking. The film suddenly reveals that it's smarter than you thought it was and it leaves you feeling quite sad actually, shifting to a third tone at the end far removed from the playful grand guignol that made up most of the running time.

In some ways the film belongs in that surreal Hollywood Babylon subgenre that David Lynch has defined recently with both Mulholland Drive and INLAND EMPIRE. It presents Tinseltown as a monstrous machine which grinds up the innocent attracted to it's bright lights like moths to the flame.

WELCOME HOME-THE JAY RANDALL STORY is available on DVD from Traynor and Neric's own website JPNT FILMS and is also currently on YouTube at this link: JPNT CHANNEL
Posted by Brian at 7:21 AM 2 comments: