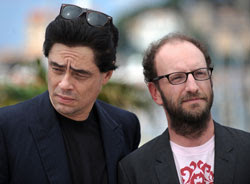 So, Steven Soderbergh just premiered his 4 hour plus some change film about the professional revolutionary in Cannes. The reactions have been quite hostile to it, for the length, the lack of conventional dramatic conflict or even, as some suggested, any drama at all. Now, in all fairness, the film is supposedly TWO separate films for release, titled THE ARGENTINE and GUERRILA, the first described as an action story and the second, "more like a thriller". I certainly doubt that it's either. What it might be, however, is an original cinematic experience from a chronic experimenter like Soderbergh and perhaps a film that may take some time to sink in. Certainly the performance of Benicio Del Toro has been praised and he has gone on to win the festival's award for BEST ACTOR, an award that has some merit this year as none other than SEAN PENN was the head of the jury.

At the press conference, Soderbergh expressed his frustrations much as Francis Ford Coppola once did regarding his lambasted ONE FROM THE HEART:

"I find it hilarious that people always complain about movies being the same, and then when something different comes along — a film that deals the cards in a different way — they say why isn't it more conventional?"

This is a valid point, however, I think the problem is that audiences don't REALLY want to see anything really different, they just want the same served up with clever variations or a fresh angle. Like a child at bedtime, they want to hear the same comforting story again just because they KNOW and LIKE that one.
Posted by Brian at 12:23 PM No comments: