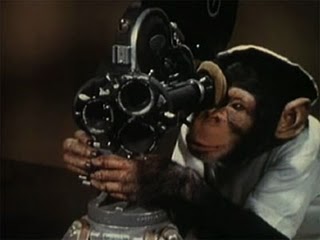 Since the OFCS (Online Film Critics Society) is compiling its Top 100 First Films list, I decided to publish my picks here for the Top 25: 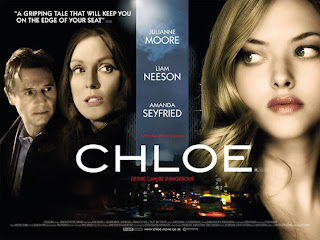 Atom Egoyan occasionally tests the waters of the kind of Skinemax Cable movie he would be forced to make if his films weren't so critically acclaimed. Actually he may not be as critically acclaimed as I think. I seem to remember that Kevin Bacon Colin Firth movie being pretty savaged by the critics. But for the most part, he's pretty well liked and remains second only to David Cronenberg in my favorite Canadian filmmakers list. The list is short since I haven't watched too much of Canadian cinema. Sorry, Canada.

Anyway, this is a film about sex. About people who no longer have sex, people who have it all the time, people who pay for it or get paid for it, and basically how easy women think it is to get a man to do it. Which men will tell you is pretty easy. Especially after a few Molsons.(That's for you, Canada.)

The lead character isn't Chloe at all but really Julianne Moore. She plays a gynecologist who isn't getting any action or affection from her husband Liam Neeson at home. That's because their daughter was kidnapped by some Middle Eastern white slavery ring and Liam's out there busting heads trying to save her. Wait...that's another movie. In this one, Liam is more brains than brawn and teaches some really boring class about art. The students like him a lot, especially the female ones and he's been known to miss a flight here or there and make the wife mad after she's spent weeks planning a surprise birthday party for him at their swanky house of glass.

This house of glass is all symbolic and really makes the family look like they're living in some kind of Aquarium. Everyone can watch what everyone is doing which is why Moore shouldn't be so surprised when her rebellious son keeps bringing half naked chicks up to his room at night. She scolds him for this but we're not sure if she's mad at him for having random sex or if it's really because he's having more of it than she is. Basically everyone treats Julianne as though she is their servant except for Liam who has even less use for her. Clearly it's been years since he's touched her physically which is how this whole Chloe plot really gets going. Seems Julianne sees some damning evidence that Liam is/has been/will be cheating on her and wants to know if he really is doing it or is going to do it. So, seeing that a young prostitute lives nearby she decides to employ the girl to see if she can ensnare Liam into having sex with her. Which I guess will prove Moore right and she can be miserable that she instigated the very thing she was afraid was/would/is happening. If you catch my drift it's VERY ambiguous as to whether Liam is doing any cheating at all.

The girl is named Chloe and she's played by Amanda Seyfried, the second banana from Mean Girls who is slowly taking over the career Lindsay Lohan could've had. But that's OK because she's a decent actress herself and very photogenic. Which is where we get to the SKIN part of SKINEMAX. You may have heard about this movie on the net, especially on sites which focus on the needs of the young male professional bored at work. Yes, this is the movie where the second banana from Mean Girls has sex with Julianne Moore.

Now that we've dealt with that we can get down to the more serious issues. Actually there really isn't much in that department. This isn't a particularly deep story but it does a good job at making what would be obvious in a Skinemax movie much more ambiguous. It's clear from the start that Chloe wants more from Moore than just money or casual friendship. The sex is really only a mask for it too. Chloe clearly wants a mother figure she can also sleep with (we know she has something sick going on when she has sex with Moore's son but can only have an orgasm by staring at his mother's high heel shoes.) This is also where the movie loses its footing. What was really working as a Bell Du Jour type of daydreamy melodrama slowly turns into some kind of Swimfan type of movie with Chloe about to kill some kid's rabbits or something for being double crossed. In the end the old adage that people who live in glass houses shouldn't throw rocks is updated to also make the point that they shouldn't throw people either.

Basically, good trashy fun that is best watched after 2AM. 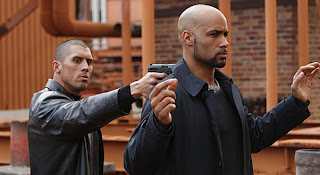 J.J. Abrams certainly knows how to open a series with a bang. Both Alias and Lost plunged viewers immediately into vast, labyrinthine worlds driven by smart and resourceful protagonists. While the content is mostly recycled classic television, the Abrams formula shifts traditional storytelling into hyperdrive. This has largely been the key to his success; he doesn't toss the storytelling baby out with the bathwater in order to appeal to modern audiences. Aristotle would have to catch up, but he would eventually recognize that all six of his elements of drama are still present; they're just a bit more emphatic and caffeinated than usual.

The premiere episode of Abrams's stylish and very well produced new series Undercovers is definitely the house blend. The pace is accelerated, the overlapping dialogue is read at speeds unheard of since His Girl Friday, the action is quite large-scale for TV, and the music is loud and brassy. Par for Abrams, the characters are all introduced in swift, broad strokes that economically define them enough to propel the initial hour of adventure.

To read the rest of this review go to SlantMagazine.com
Posted by Brian at 9:49 PM 1 comment: