ONCE UPON A TIME...IN HOLLYWOOD Review 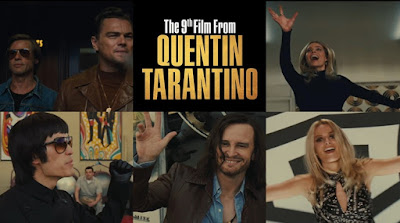 SYNOPSIS:Quentin Tarantino’s "Once Upon a Time... in Hollywood" visits 1969 Los Angeles, where everything is changing, as TV star Rick Dalton (Leonardo DiCaprio) and his longtime stunt double Cliff Booth (Brad Pitt) make their way around an industry they hardly recognize anymore.  The ninth film from the writer-director features a large ensemble cast and multiple storylines in a tribute to the final moments of Hollywood’s golden age.

Once upon a time there was a place called Hollywood. Once upon a time there was Charles Manson. At first these two things seem to be completely unrelated but in actuality they were quite connected. During the twilight days of the "Old Hollywood" Charles Manson and his "family" lived on the fringes of the film industry-The dream factory. They ate the scraps of food tossed out by those who lived and worked there and made an abandoned movie ranch their home. The Spahn Ranch was an illusion of course. A fake town used in countless movies and TV shows to present the myth of America and Hollywood over and over. Manson, a failed singer-songwriter, was himself one of the many disillusioned dreamers in the Hollywood myth.

But unlike most of the others, Manson would use his disillusionment to fuel something much more sinister.

In 1969 Hollywood was in the midst of a major tidal shift. The myths were no longer believable. Bloodless gunfights on Gunsmoke were unfolding on the same televisions that brought home the war in Vietnam. In the cinema, Easy Rider sent shock waves to the sleeping studios proving that they had lost their audience. Film and acting had changed. Movie stars now looked more like ordinary people and appeared in stories filmed in real places.

It was in the summer that the separate but parallel tracks of Hollywood and Charles Manson finally collided. On August 8th, 1969. In the city of Los Angeles, California. On Cielo Drive, the home of director Roman Polanski and his pregnant wife Sharon Tate. You probably know the rest.

It's now both history AND myth.

It's from these real and mythic elements that Quentin Tarantino built his latest film. I say "built" because in some ways this is a very mechanical film. For all of its loose shaggy dog qualities, the screenplay is quite rigidly constructed via two storylines in two separate parts held together by the ticking clock of August 8th. Tarantino lets his characters wander more than ever before but only to reveal the invisible leash that pulls them back to the narrative center. Tarantino is not Robert Altman. Random and seemingly trivial elements repeatedly reveal to be important to the overall narrative. Even when that importance sometimes turns out to be trivial.

The film is filled with all of the filmmaker's fetishes. To call it self indulgent is less a criticism at this point than a label to its contents. There are moments in the film that are probably meant to entertain no one but Tarantino or as Billy Wilder once said, "Six friends in Bel-Air". Like many other great filmmakers, Tarantino does not reach out to the audience so much as to try to absorb them, swallow them whole, consume and infect them with their passions and obsessions. To show the audience "reality" through their own eyes.

Once Upon a Time...In Hollywood presents this "reality" on two separate tracks as well. On the one hand, the physical reality of Hollywood 1969 is presented in painstaking detail by production designer Barbara Ling. Characters move through a physical space that appears to be completely authentic. Spahn Ranch itself is also perfectly recreated. If you want a comparison, watch the rare documentary Manson by Robert Hendrickson and Lawrence Merrick. Made in 1973 at the actual ranch and featuring interviews with family members still living there, it is an amazing historical document.

The audio reality is just as impressive. Tarantino selects some great tunes from the era but this is largely heard as ambient sound, coming directly from the speakers on car radios, or televisions nearby. It's an effect Orson Welles intended to achieve in Touch of Evil and used extensively by Walter Murch in George Lucas' American Graffiti. This effect immerses us in a 360 degree reality of space and time.

On the other hand,  the narrative reality is one step removed. Of course neither Rick Dalton (Leonardo DiCaprio) nor his show Bounty Justice actually existed (Not yet at least. Tarantino claims to have written three episodes of the half hour western and is considering actually making it for Netflix). But there was a Steve McQueen and his Wanted Dead or Alive is the type of show that Tarantino is referencing. Dalton himself is meant to be an amalgamation of the many male actors from the era who were desperately trying to make the leap from TV to films and a career in the "New Hollywood" represented by Roman Polanski in the movie. Rick watches Polanski and his beautiful wife Sharon (Margot Robbie) from his house next door desperately hoping to be invited over so he can meet them and be accepted as an equal. But the gates to their home remain closed.

Cliff Booth (Brad Pitt) doesn't exist either. The character was probably inspired by both Tom Laughlin and Burt Reynolds' stuntman/director buddy Hal Needham but Cliff is definitely his own man. Cliff represents the masculine ideal of old Hollywood with all the baggage that comes with it. One can look at this movie and see elements of the western in it as well. Seen through that lens, Cliff is definitely the cowboy hero. Despite some moral ambiguity, Cliff is as loyal, tough and honorable as his own beloved dog.

Both DiCaprio and Pitt do some of their best work in this film. Rick Dalton is a whining character full of self loathing which could've easily been off-putting if DiCaprio didn't know exactly how to play it. He leans right INTO the character's shallowness for both humor and genuine emotion. His scenes with the fantastic Julia Butters as a precocious 8 year old method "actor" (not "actress" as she says) are some of his best in the film.

As usual for Tarantino there are many cameos by actors from Hollywood's past and present. Among these, former TV Spider Man Nicholas Hammond as director Sam Wanamaker, Margaret Qualley as Pussy, a flirtatious member of the Manson family and Dakota Fanning as Squeaky Fromme are the most impressive. But it's Pitt who really runs away with the film. He is completely at home in the character and one could imagine a great TV series featuring Cliff Booth as an out of work stuntman investigating crime in 70s Los Angeles. At the very least, it would've been better than Mannix. 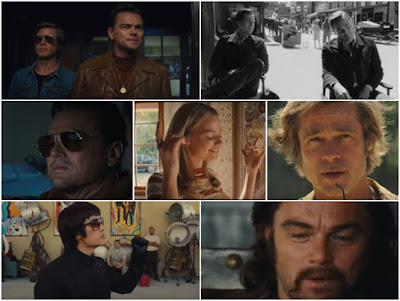 Tarantino handles these various threads of reality and fictionalized reality playfully. When Sharon Tate goes to the movies to watch herself in the new Matt Helm picture The Wrecking Crew it's not Margot Robbie we see onscreen but rather the actual Sharon Tate. Brian DePalma would love this deep dive into metafiction which features an actress playing an actress watching the real life actress playing a character onscreen. Robbie nails this moment and the fusion of fiction and reality makes it all the more touching.

Although the film seems plotless for the most part, drifting from one episodic situation to another, Neil Diamond's Brother Love's Traveling Salvation Show reminds us that it's a "...hot august night and the leaves hanging down and the grass on the ground smelling sweet...". We know that it's all going to intersect soon. We are drifting toward something ugly and nightmarish so the second part of the film has an atmosphere of doomed inevitability. The sword of Damocles hangs over the entire movie and it's with this terrible inevitability that Once Upon A Time...In Hollywood reveals the sad irony hidden within its title.

As expected, Tarantino plays games with history. In Inglorious Basterds killing off Hitler did not give many pause but in this case Tarantino risked crossing the line into incredibly bad taste. But he solves this problem with great creativity and even humor delivering us some satisfying (and of course incredibly violent) wish fulfillment. Everything works out for the best and even Rick gets what he's always wanted. The gates finally open for him. But the lie of this Hollywood happy ending leaves us feeling bittersweet. By granting this collective wish, Tarantino leaves us even more haunted by the sad truth that contradicts the fairy tale title onscreen: Once Upon A Time...