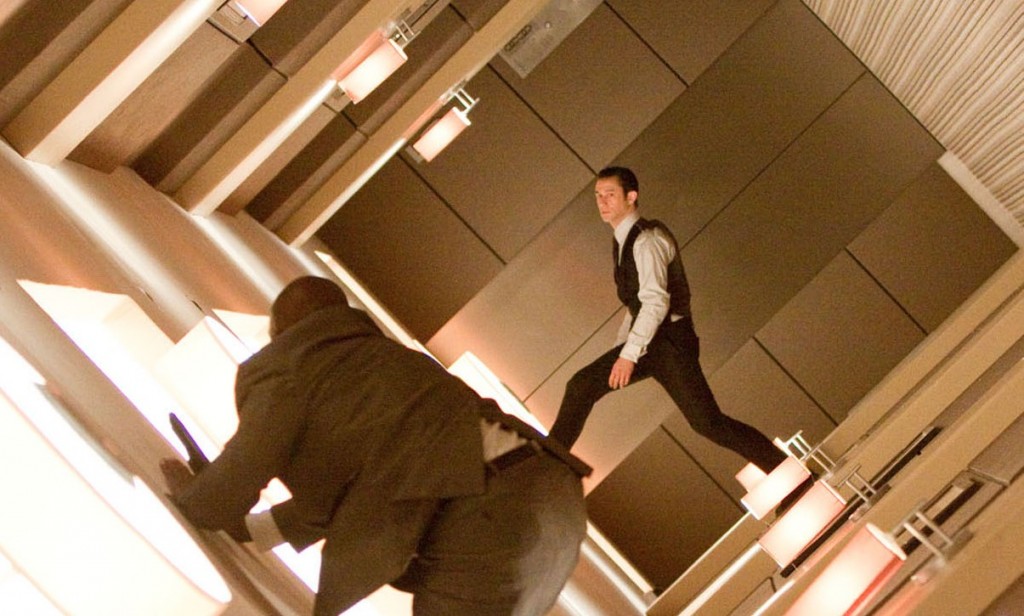 I once had a dream in which I was late for work. Got dressed as fast as I could, hopped in my car and tried to beat the traffic. Only at some point I was no longer in my car or even on a road. I was in a trench during what appeared to be the first world war. At this point, I was very worried about being sent into battle and tried desperately to remember if I was even trained to fire a rifle. Though I don't smoke, I asked another soldier for a light. As he leaned in, I held my hand up and said, "Oh,no! I've got to go. I'm really late for work!"

I wasted your time with this shaggy dog story because it illustrates what Inception is NOT. It's not really a movie about dreams. At least not the ones I have. My dreams are silly and openly surreal. Even when they are frighteningly real, there is always something illusory about them in retrospect. They are never rational. But the dream worlds depicted in Christopher Nolan's latest film are among the most rational ever presented. Everything looks and operates the same as it does in "reality" and the most unusual thing might be whether one orders a croissant instead of a bagel for breakfast. I wonder if this is how Chris Nolan dreams. Maybe he falls asleep at the word processor while working on a new screenplay and then wakes up in a dream where he just continues writing-for hours. Then goes out for a coffee and hits the restroom. All in a dream's work.

What Inception really does is construct a game of sorts, an intellectual challenge for both the creator and the audience. The game Nolan wants to design requires alternate realities and since dreams work in this regard dreams it shall be. At its most basic level, the film is a heist picture. Only instead of robbing banks, Dom Cobb (Leonardo DiCaprio) and his team steal secrets from your subconcious while sleeping. Although this has many uses for corporate espionage and politics, in this case it's mostly a personal motive. Cobb just wants to be able to go home and see his kids. Unfortunately, there's a warrant out for his arrest accusing him of murdering his wife, Mal (Marion Cotillard). Following a failed mission to extract info from a ruthless and smart Japanese businessman, Saito (Ken Watanabe), they learn that they were essentially set up. It was really an audition held by Saito to find the right people to carry out his plan. Saito wants Cobb to enter the mind of the heir to a powerful energy corporation, Fischer (Cillian Murphy)but not to steal anything. Saito wants him to implant the idea to break up and sell his father's business so he can stop their monopolization of the energy market. This is known as "Inception" which according to the movie's mythology is very risky. Saito promises that in exchange for doing the job, he will make Cobb's legal problems disappear. Desperate, Cobb takes the job though there is something in his eye that suggests he understands the risks more than the others. None of them are fully aware of the danger that his dead wife Mal represents. She appears in their dreamscapes as a femme fatale with ice water in her veins. The question becomes whether or not Cobb will have the ability to control her and if need be, destroy her.

Much of the film is surprisingly simple given the subject matter. There is little or no real characterization but this is less a problem in a film like this than it would be in a standard action adventure. Here, we don't really need to know much about Arthur (Joseph Gordon-Levitt) to still enjoy his zero gravity skills during the dynamic hallway fight. This is because the fight itself is not as important as its place in the game. Why Arthur has to hurry and get through this gauntlet of dream projections is what we care about not "Arthur" himself. This is why it is imperative that the audience be made to understand the rules of the game completely.

It's all laid out pretty economically. We are told that there are many levels in dreaming-dreams within dreams-and the work of the dream thief is often done in the deepest levels, especially when trying to implant an idea foreign to the dreamer. So, this comes into play on the Fischer job. Cobb and his team have to go down at least three levels in order to implant the idea and here is where the most brilliant idea Nolan has ever had, probably the most brilliant idea he will ever have, is introduced:

In each level time passes slower than the one above. What this means is that if in "real time" you are asleep for 10 minutes, level 1 will be an hour, level 2 a week, level 3 a month, level 4 perhaps years. You will age there too. The movie then has characters operating on each level in synchronicity to do various things in order to keep it all from collapsing.

Lasting for a good third of the film's length, this is the "mind blowing" stuff you keep hearing about on TV. It's worth every penny it cost to film and every penny it will take from the babysitter to the snack bar for you to go see it. Once again, Nolan borrows from classic heist and caper movies to design the clockwork tension but this particular clock is more like Dali's dripping watch. Each reality being affected by the one above it but each moving at it's own pace. It's suspenseful, witty, clever, dynamically edited and fun. As it stands, it is Nolan's greatest work of filmmaking and his best claim to being a major auteur. However, the rest of the film does not exactly live up to this level of filmmaking and a few seemingly minor flaws keep it from becoming a total masterpiece.

The pretentious character names aside ("Mal, "Ariadne", seriously?) the movie is strikingly unpretentious. This is both good and bad. The problem is that it takes a potentially mind blowing idea and strips it down to a James Bond adventure that uses "dreams" as a device rather than being built from the idea itself. While enjoyable there's a feeling throughout that opportunities are being missed. Why are these dreams so manageable? How come more surreal anomalies do not enter into them? Even on a playful level. Even the lamest sequel to Nightmare on Elm Street was more inventive in its use of the dream concept.

Ellen Page is a major flaw. She's terribly miscast in an underwritten role. The Phantom Menace level dialog is most apparent with her character since she has the most psycho babble to spew out. But the main problem is that Page just can't hang here. She is supposed to be Leo's conscience and guide and you just don't buy it for a second since she comes off as his nerdy little sister instead. She is also way too "ironic" an actor to give the film the emotional "kick" it needs. Someone warmer and more sincere like Natalie Portman would've been a lot better. But the character still needs to be rewritten. Nolan didn't do Page any favors.

This brings up the script's humorlessness. Nolan comes off as a dry fella in most of the interviews I've seen so this makes sense. But really, no jokes about sex in a movie about dreams? I know it's a PG-13 but c'mon. This is more of the dour, depressed world that Nolan loves. Even the world created by a pair of loving parents turns out to be a crumbling dead planet of faceless, anonymous buildings.

Strangest of all given that Nolan borrows so much from heist and caper pictures, he fails to include important third act developments. The big job they pull is amazingly without complications other than that of time. In most caper pictures, there is always the possibility of betrayal, of fate coming down on the characters like a ton of bricks. Not so much here.

Nolan is also still struggling with action scenes. He covers them with a hand held camera and while not on the subliminal level of a Paul Greengrass (The Bourne Ultimatum) they leave a lot to be desired, achieving nothing near the economy of framing and movement found in the work of Spielberg. But worst of all, Nolan fails Action 101 during the entirety of the siege on the snowbound "hospital". Apparently shot on the planet Hoth, Nolan ignores the most basic of rules by dressing the "good guys" and "bad guys" in the same white snowsuits making the entire sequence barely coherent visually. Who got shot? Who is chasing whom? It's a mess.

I don't want to dwell too much on the flaws, however. The film is very entertaining and for the most part incredibly skillful and clever. A final shot seems to suggest that the entire film requires a second reading but I don't think this is what Nolan intended. I think it's meant to be read in terms of DiCaprio's character making a decision about which reality to accept rather than for us to question the reality itself. But the internet being what it is, I am sure this question will be debated for some time. The critical reaction to this film has been very odd going from one extreme to the other in a matter of days. The truth is that Inception may not blow your mind, but it'll at least tickle it for a few hours.
Posted by Brian at 10:41 PM 12 comments: