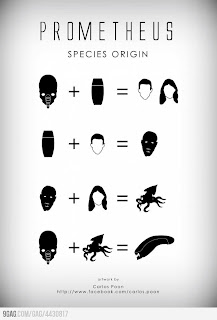 PROMETHEUS is only vaguely related to the Alien franchise being more or less a remake of Star Trek V: The Final Frontier. It's also co-written by Damon Lindelof of Lost fame and like that program, Prometheus devours cool ideas as fast as it ignores or contradicts them. That said, the film is not bad. I don't know if I would say it's any good but there were moments of suspense, moments of shock and grue, and moments of laughter. Not many of those laughs were intentional but leave it be that Guy Pearce provides quite a few of them doing his impersonation of "Keir Dullea" in 2010: The Year We Did Not Really Make Contact. Ridley Scott does his impersonation of "Ridley Scott" circa 1979 and this is a good thing. It's been a long while since he trusted his ability to actually frame a shot and leave it alone.

Still there are enough good things in the film to recommend it. The cast is uniformly good-with Michael Fassbender in particular doing some fine work as an android.

NOTE: Fassbender's penis does not make a cameo in this film.

Finally, I don't know if I like the idea of man's creators being "roided up" versions of ourselves. Imagine going to a planet at the far end of the universe only to find out that we are really the descendants of the cast of "Jersey Shore". I mean, why bother?