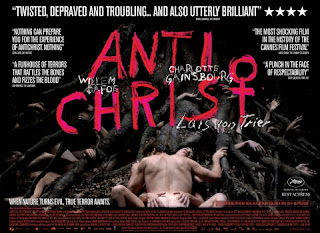 The phrase "WTF?"is pretty much the perfect Twitter-sized review for this film. Von Trier is a prankster at heart so any serious attempt to guess at WTF he had in mind with this Bergmanesque psycho-drama could just end up with the Danish auteur pulling your leg. Or worse some other more private part of your body. After seeing this film and its obsession with genital mayhem you'll get my drift.

Since its debut at the Cannes Film Festival, the film has received some wildly divergent reviews. That's because Your Mileage May Vary depending on how well acquainted you are with the cinema of Von Trier and transgressive art itself. This is a film that begins with a shot featuring penile penetration and then goes much farther from there. 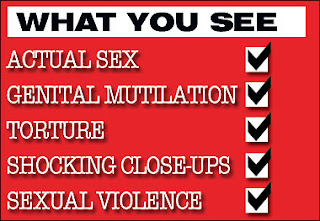 The only thing missing from that checklist are "Animals Who Say Unpleasant Things Like 'Chaos Reigns'" and "Willem Dafoe's Ass Is On Display More Than Once". 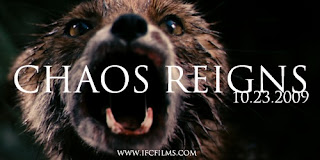 The film's plot sounds simple: Following the accidental death of their infant son, a Therapist (Dafoe) takes his wife (Charlotte Gainsbourg) to a cabin in the Seattle mountains in order to deal with her nearly overwhelming grief and guilt. Almost immediately upon their arrival, it seems as though some kind of force of nature intends on torturing them both mentally and physically. What happens as a result of this needs to be seen not described. Suffice it to say that it involves some of the most shocking and intense imagery you will see in a contemporary film. This film rivals Takashi Miike's Audition in the "I can feel that pain myself" department.

Charlotte Gainsbourg gives a fully committed madwoman performance that ranks right up there with Von Trier's other suffering/borderline insane childwomen like Bjork in Dancer in the Dark or Emily Watson in Breaking the Waves. She also wields a mean pair of scissors. Dafoe is excellent as usual and this is key to the film since it only contains two characters for its entire running time, with Dafoe actually appearing the be the rational one. The running time is fairly short for Von Trier-108 minutes-and yet the mental and physical torture is so intense it may feel endless to some. Some may never want to engage in sexual intercourse ever again.

It's probably to the film's benefit that its meaning is so obtuse. With a forest called "Eden", nameless "He" and "She" characters and discussions of the evil inherent in nature the film is already dangerously close to student film pretension. Von Trier saves himself through his own sardonic sense of humor and the fact that he just moves on. All kinds of inexplicable events come to pass and they just pass on by without much fanfare at all. It's wonderfully surreal in that regard. In that respect, the Fox may have provided the best explanation of all: Chaos Reigns.
Posted by Brian at 3:34 PM 2 comments: