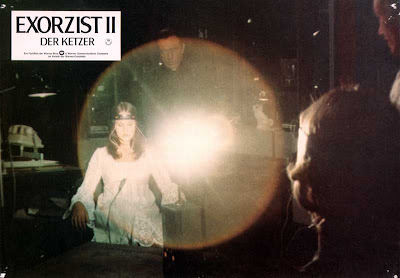 There's something to be said for directorial ambition. It's common to lay blame whenever a filmmaker overreaches instead of congratulating them for not doing the mundane, safe, and obvious. Some filmmakers make a habit of overreaching and John Boorman is near the top of a list that would include at the very least mad geniuses like Orson Welles, Francis Ford Coppola, and Terry Gilliam. Boorman is a man with lots of mad ideas swirling uncontrollably in his magpie mind. Sometimes these ideas come together in coherent ways and we get films like Point Blank, Deliverance, Excalibur, Hope and Glory and The General. When they come together like a mixed stew we get films like Zardoz, Leo the Lost and, of course, Exorcist II: The Heretic.

I have to admit that I don't think there is a great divide between the two forms of madness.

This film is basically reviled by everyone. It's greeted with camp derision the moment it's brought up in conversation. Well, that's because it's completely and utterly batshit insane. Taken on its OWN terms, without expectation, the film is still pretty Godawful. However, it remains essential viewing for it's sheer ambition and reach which is amazing. No film could achieve it's goals and certainly not a sequel to a box office hit with an expectation set of its own.

Eschewing the procedural format of it's predecessor, Boorman places the follow-up square within a world of magic and fantasy-a world not so different from those depicted in Boorman's earlier Zardoz or later Excalibur. This is the premise on which the film starts and it is already a problem. The classical horror film (which Friedkin's The Exorcist still is despite its extremes) asks the audience to suspend their disbelief by having the supernatural invade what appears to be a fairly natural, acceptably normal world. The original film used realistic location photography, naturalistic and motivated lighting, and subdued performances in order to create an everyday mundanity. Defiantly, The Heretic begins on the wings of a demon and is set in a New York City as imagined by a blind and insane Chinese production designer.

A research facility made up of glass, mad scientist helmets ("The SYNCHRONIZER") which can link 2 separate brain waves, a constantly sweating Richard Burton acting up a storm, really cheap looking FX, James Earl Jones as Kokumo, Ned Beatty flying a helicopter, and dialogue that sounds like something was lost in translation from the original Swahili basically do everything possible to create disbelief rather than suspend it.

But the thing is, the film has so many more ideas than Friedkin's film it is a shame Boorman couldn't pull it off. He seems trapped between the literal and the metaphorical, between the realism of the original film which he has to respect on the one hand and the personal desire to make a film that exists on a whole different plane altogether. It seems that he and "creative associate" Rospo Pallenberg wanted to challenge the conventions of narrative cinema in which stories are told through plot and character and to take off into something much more visual and suggestive. A film told through symbolic imagery and associative ideas. This could've been amazing and would've brought back some of the magic of the silent film, particularly the early films of Fritz Lang. But note that I said "Silent Film". When The Heretic is driven by Boorman's imagery and Ennio Morricone's loud and incredible Disco hell score, the film begins to soar. It comes crashing down the moment Linda Blair says something abstract and inexplicable to Richard Burton, however, since this makes us instantly realize how absurd the film is. It may be that the best way to watch The Heretic is to shut off the soundtrack and play a CD of Goblin's Suspiria score as accompaniment.