The Black Shoes:
Or How Darren Aronofsky Became Trapped in a Powell-Polanski-Pressburger

Upon first glance Black Swan appears to be a psychological horror film about a ballerina who goes insane. But in reality it's a movie about a filmmaker who goes insane-in good ways and bad. Perhaps not the kind of madness that engulfs Nina Sayers (Natalie Portman) onscreen. No, director Darren Aronofsky has become spellbound with aesthetic perfection. He takes this simple and clearly MINIMAL story and directs the very life out of it, subjugating everything to a dictatorial design concept. The concept is ambitious and fully realized with all the tools at his talented disposal. Only the tools are much too large and clumsy to get the job done properly.

In terms of content, Black Swan is a potpourri of ideas, themes, characters and plot devices from a whole range of horror films (Carrie, Repulsion, Cat People, Jacob's Ladder) and backstage musicals (The Red Shoes, The Phantom of the Opera, Showgirls). You have the shy but ambitious young ingenue(Portman)who gets her big break when the Svengali-like Ballet director (Vincent Cassell) decides to replace the aging company star (Winona Ryder) in his new production of Tchaikovsky's "Swan Lake". The ingenue, Nina Sayers, is a kind of sheltered child woman who lives with her very protective stage mother (Barbara Hershey) in a small stuffed animal and pink walled adorned apartment in NYC. Mommie Dearest and daughter have a disturbing relationship in a private world of their own making. Nina not only has an eating disorder (quite cruelly mocked by her mother with a large celebratory cake) but a history of "scratching" as well-a problem significant enough that mom sometimes has to put protective mittens on her hands.

Of course, Nina has a few other issues as well-one of them being the fact that she's probably schizophrenic. Once cast in the coveted dual role of "white swan" and "black swan" (see where this is going?), it becomes clear that she has problems conveying the rage and sexuality needed for the role. She begins to see Lily (Mila Kunis) her "alternate", as competition. The carnal Lily is very suited to the role of the "black swan" and Nina's desperate desire to find that side within herself sends her into a spiraling descent from sanity.

You can already see how LITERAL the movie is just from the description. "White Swans", "Black Swans", Lily is made Nina's "alternate" and of course mirrors proliferate. 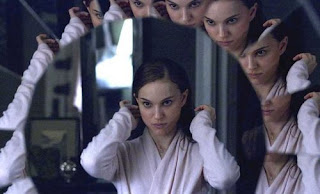 The film is also literally black and white. Not shot on black and white filmstock, the film is in color but more often than not the screen is divided into blacks and whites. Wardrobe, locations, set dressings etc. are all defined by this design choice. Initially the visual command is very admirable but instead of allowing us to immerse ourselves into his carefully crafted world, Aronofsky has to push it into our collective face. So much so that it begins to grate on the nerves as yet another scene is surrounded by this Yin/Yang symbolism.

The desire to control the tiniest detail onscreen comes very close to the obsessive-compulsive and it's not long before the director's bag of tricks becomes extremely obvious. Instead of allowing a scene to breathe or allowing for Portman's raw and fragile performance to emerge on its own, Aronofsky is almost compelled to throttle the movie with expressionist devices right out of the film that haunts this one the whole time, Michael Powell and Emeric Pressburger's nightmare fantasy The Red Shoes. In fact, there seems to be a stylistic collision going on throughout with Roman Polanski's trademark surrealistic realism being fused with the operatic ARTIFICE and theatricality of Powell-it's like oil and water. The story can be played either one way or the other but the two together work against the strengths of both. But with it's minimalist screenplay and realistic performances, the film should've been handled with more subtlety. The subtlety that uncharacteristically showed up in Aronofsky's last film, The Wrestler. That film allowed time to just watch Mickey Rourke's performance, to observe the process of his sport in a way this film does not do for ballet. Instead, Aronfsky's camera and scissors go into attention deficit overdrive and try to compensate for the minimalism with furioso-even going so far as to indulge in some really questionable CGI that makes the avian transformation also literal (Perhaps a brief shot of Nina seeing herself in a shadowy reflection would've been uncanny and frightening but what we get is very close to some cheap werewolf movie).He need not have worked so hard as his story was decent enough and his actors extremely able. What could've been something truly disturbing and memorable is reduced to an interesting, but failed experiment.

Nina Sayers is continually told that to play the black swan she must "let herself go", that true perfection can only come through the danger of spontaneity. Well, this could be advice Darren Aronofsky could take to heart. 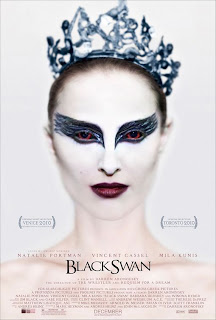 I just saw the flick and I completely agree. Don't think I've read a more correct analysis. Except for me, it was reduced to a pretty damn fun and captivating movie, albeit not as interesting as it could have been. 4/5

Relevant, well argued analysis; thank you. For us film critics it's relatively easy to contemplate an oeuvre from the outside and understand what went wrong, yet it's always frustrating to witness when one falls just short of perfection.

There are very fine performances here. Plus how often does one get to see Ingmar Bergman blended with Steven King? Integrity and good clean fun, what more could you ask for a piece of entertainment?

thank you for your analysis. I was quite disturbed by the film, that it moved into horror and effects rather than letting the film 'breathe' as you said. gracias

Spot on. You gave the conclusions my jumbled mind was looking for as I left the theater. This film shows how you can get confused by a very simple story--that is to say, you get confused because you think your are missing something important when in fact the movie is as literal and thematically overt as your mind gathers from the very beginning.
(However, I did like it that when Nina finally cracks a mirror, it not only leads to her death but also helps her reach perfection; without the deadly cut in her gut, she would probably not have been able to let loose and be 'in the moment'--which was the only thing standing in the way of the perfect performance. She had to break through the skewed reality of mirrors to find her true self: the perfect being. But since mirrors reflect a skewed view of reality, a mirror image is not true and not reality. As overexplicit as this may seem, I have to say I fall for it).

Sweet review although I would not agree with you on the point that "...a brief shot of Nina seeing herself in a shadowy reflection would've been uncanny and frightening but what we get is very close to some cheap werewolf movie." We mustn't forget that Aronofsky is a talented image-maker who seems always to have much to prove and Black Swan is yet another ride on board of his skewed vision.

Ps: Perhaps you mightn't have thought much of that shot... all the more reason for you to make a movie yourself. Afterall, no one is stopping you. (:

"Ps: Perhaps you mightn't have thought much of that shot... all the more reason for you to make a movie yourself. Afterall, no one is stopping you. (:"

Are you serious right now? The old, "Think you can do better" argument? Critics exist for every type of expression of art. That's how the world works.


As for the review, I thought it was a tad harsh. Namely, I never felt like the black and white imagery was being shoved in my face. I also never felt like I was watching a cheap werewolf flick.

I disagree with your review. Nina was exhibiting psychosis - which is different than schizophrenia. This film is much different than the Wrestler, and prior movies. The director wants us to experience life through her eyes, and for that he did an amazing job. We were as confused with reality as Nina was.

The Black Swan: A Lesson in Parent/Child Relationships
http://www.psychology-advice.net/the-black-swan-a-lesson-in-parentchild-relationships

I couldn't agree more with this review. It would have been more captivating if the director as you said, would let the movie "breathe" and let audiences work out some parts. The mirrors were too exaggerated, and too many scenes contained them. First intrigued by the visuals of the film, I was unimpressed that there was no real meaning behind it, except the fact that Nina is driven insane to achieve perfection.

I couldn't agree less. I'm not a filmmaker, but a psychologist. This film is amazing, and the direction only helps it along; the symbolism is extremely well played out throughout - but if you studied Carl Jung symbolism you probably already knew that. Oh, and yes, Nina is psychotic, not schizophrenic.

"BLACK SWAN" is INCREDIBLE movie from starting to end. I watched it with my family and we people entertained it lot. It is a masterpiece of unheralded success.

This movie is one of the best i've seen ever. I watched it with my children and they entertained more than me. :D