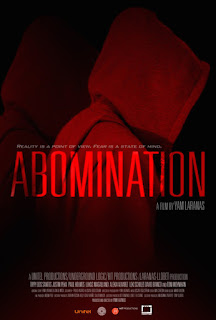 While everyone has been off talking about Ti West and Adam Wingard, Yam Laranas has been working quietly and steadily making some of the most effective thrillers in recent years. ABOMINATION is a mind bending puzzler that makes you question the reality of the narrative you are seeing.

Rachel(Tippy Dos Santos) is found unconscious in a city street and claims to be another person who was brutally murdered two months earlier. She escapes from a psychiatric hospital in order to prove her identity and find the truth about her life, her death, and her murderer.

This is the kind of story that's a tightrope walk for a filmmaker-one which many fail to cross. These are tricky stories which are hard to pull off without creating confusion or being instantly obvious. If you plant too many clues then the audience will get ahead of you and the film will be laughably predictable as some of M. Night Shyamalan's films have proved. Plant too few and the audience will be scratching their heads as the end credits roll wondering if anyone involved in making the film could explain the mess onscreen. Laranas handles this expertly by focusing on character and family drama so that it becomes inseparable from the mystery. Laranas is one of the best filmmakers working in the thriller genre today and this film is a perfect example of his understanding of cinematic craft.

Available on iTunes
Posted by Brian at 6:50 PM