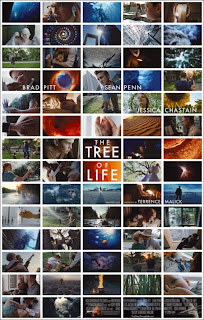 The only thing I can tell you about this movie is that it's less than meets the eye and that if you quickly scan all the images in the above poster and think about them for a minute you will have pretty much the same experience as you might by spending the 12 plus hours it takes to run in the theater.

Speaking of seeing it in the theater, I had the most amazing experience just buying a ticket to see this at my local multi-fauxartplex. Upon delivering the words "One for 'Tree of Life'" to the dazed box office attendant, I was immediately halted. She raised her hand as though she were a gypsy fortune teller warning me of imminent danger and began reciting some kind of prescripted statement.

Sounding like someone on a telethon reading a cue card, the girl said, "'Tree of Life' is an unusual film. It does not relate a standard narrative. If you find that 'Tree of Life' is not to your tastes or liking you have to return to this box office no later than 30 minutes after the start of the film in order to receive a refund. No refunds will be issued after the 30 minute limit."

It was the first time I have ever received a Surgeon's General warning about the dangers of watching a movie.

Malick needs to keep these films for his eyes only. This is the kind of film made to exhaust all patience. My patience has just run out writing about it.
Posted by Brian at 12:57 PM

Thank You. By the way, this was neither lazy nor short sighted. It is an opinion. I am a Malick FAN but I think he's become a parody of himself as of late. Honestly this film either deserves about a thousand pages of analysis if you admired it, or just a few paragraphs of derision-which I offered. IMHO the film would be best played on a loop in Malick's own house.