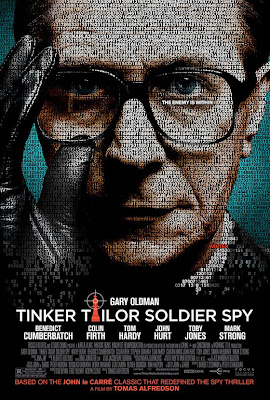 At one point in the middle of one of the many whispered conversations in this very "wink wink nudge nudge" narrative, someone says that the real problem is that she has been feeling "severely underfucked" these days. One could say that for the entire cast of old men who run Great Britain's spy division. All of whom would seem to be better off seeking the occasional carnal pleasure over a life of whispers, shadows, isolation and liquor. George Smiley (Gary Oldman) above all of them.

Smiley is "retired" from his official position working for the British Secret Service, an organization which appears to be 5 aging men sitting in the back office of an anonymous office building. But he's soon asked back. Commissioned to find out just who the mole is within their department. Apparently it goes all the way up to the top.

This is the kind of movie where the lead character gets involved in a narrative so labyrinthine that he should eventually suspect himself at some point. For those unfamiliar with the work of the nuclear serious John Le Carre', the constant time shifting and deathly stares may even have them wondering if they themselves are the mole. But this is really a finely crafted film with some absolutely wonderful performances from its sterling cast.

Oldman in particular is absolutely fantastic, much in the way Gene Hackman was in Coppola's The Conversation. Both actors are not known for their subtlety and when forced to play a character so unassuming and internalized, there is an amazing tension that seems to exist right under the surface. So although George Smiley seems to be all deadpan stares and soft tones, there is always the sense that something violent and emotional is percolating within. It makes the most quiet scene into one of suspense. This is the main difference between Oldman and the late Alec Guinness' interpretation of the role. Guinness had a retiring and calm personality which was rolled into a kind of tired, distant but benevolent father figure. Oldman feels more genuine in a way, just the kind of nobody that would make a perfect spy. The man in the room you would instantly forget.

Tomas Alfredson (Let the Right One In) directs the film with an almost mathematical precision. Framings are never less than SPECIFIC and much use is made of the width of the widescreen to separate characters and alienate them from one another. The direction is so controlled that it begins to feel as though the characters are not just trapped in a cold "dog eats dog" world but trapped literally in a glass jar. The time shifting structure is perhaps one level of narrative conjuring too many. When the events of the linear story itself are more complex than Chinatown(1974),jumping around in time may not be the best choice. That said, Alfredson manages to create a nightmarish atmosphere on the level of Polanski himself. He merely lacks the master filmmaker's understanding of narrative economy. The film is very much worth the effort but a few cups of coffee beforehand may be in order.

I haven't seen this film yet, but it annoys me that everyone sees Alec Guiness' TV performance as George Smiley as the benchmark Oldman has to meet. Few people know that Simon Russell Beale played George Smiley in eight Radio 4 dramatisations of le Carre's books. To me, this is the definitive Smiley so far - I'm looking forward to seeing the film to see how Oldma matches up.