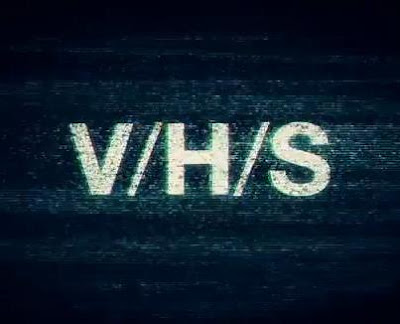 "New Wave" Horror anthology is way too long, tiring and for some-nausea inducing-to watch on the big screen. Forget all the complaints of The Blair Witch Project being too shaky to handle, this film assaults the senses like Clockwork Orange's Ludovico Treatment.

The Filmmakers should've been made to consult one another regarding their content-one more segment with a group of A-HOLES carrying on like the cast of JACKASS and my head may have exploded. It isn't surprising that the two best segments feature characters who are at least vaguely likable. Ti West's segment "Second Honeymoon" is most effective in this regard. West merely knods to the "found footage" concept while making sure that his story is as effectively told as a more conventionally shot movie. It works both because and despite the fact it is supposed to be someone's home video. It also contains the single most frightening and tense moment in the entire 2 hours of horror movie sound and fury-a scene that is also as quiet as a whisper.

Five stories and a wraparound is the classic anthology structure but so much is repetitive here due to the "found footage" concept. There are only so many ways to toss a camera into the action and keep it running plausibly. As it stands- I would rate them like this-Ti West's is the best, followed by Radio Silence and Joe Swanberg's in a statistical tie. The other two could've really just been erased.

I am agree with your writing. You post a great news here. Thanks for share this is.

I really enjoyed your blog Thanks for sharing such an informative post.

A Best Hand Held Massager is smalleror cheaper than another doesn’t necessarily mean it’s less effective, it just means it’s designed with another purpose in mind. The first thing you should know about self-massage tools isthat they come in many shapes, sizes, and price ranges. Just because

Mason said...
This comment has been removed by the author.
12:08 AM

Only aspire to mention ones content can be as incredible. This clarity with your post is superb and that i may think you’re a guru for this issue. High-quality along with your concur permit me to to seize your current give to keep modified by using approaching blog post. Thanks a lot hundreds of along with you should go on the pleasurable get the job done. If You Want to Buy real and fake passport online

Thanks for helpful article!

You have done a really excellent job. I like your post very much. Thanks a lot for sharing !!