One of the many low budget shockers produced in the wake of Alfred Hitchcock's pop culture phenomenon Psycho, Dementia 13 is a surprisingly effective knockoff with unique qualities of its own. The oft told story is that Francis Ford Coppola saw an opportunity to make his first official feature film while recording sound for Roger Corman's The Young Racers on location in Ireland. He knew that Corman could never resist shooting a second film once on location since the major costs of shipping actors, crew and equipment had already been spent. So, Coppola sat up late for three nights and banged out a script with just enough exploitation elements to receive Corman 's financial blessing. With cash in hand, Coppola dove headfirst into his first "major" production, a film which has as much to do with Psycho as it presages the work of Italian filmmakers in the giallo genre.

People always marvel at the fact that Coppola wrote the screenplay in three nights. Well, this is a focused man who once wrote a script ("Pilma, Pilma") in a SINGLE night. Trying to get out of the draft by flunking his physical, Coppola fueled himself with cup after cup of black coffee and wrote a script that went on to win UCLA's prestigious Samuel Goldwyn Award. Now, THAT may have been a good script but Dementia 13 is clearly the work of a writer feverishly banging out pages over three days.Instead of Billy Wilder's goal of a screenplay that was a "clockwork mechanism", this script was a "patchwork mechanism". It's contrived, convoluted, and highly inconsistent in quality. It's also breathlessly spontaneous and desperately brilliant at times, erupting out of the mundane as though the man's mind was gasping for air trying to push the story along.

The thing is, the script didn't have to be very good at all. What had to be good were the set pieces and the filmmaking and luckily both are of very high quality. Coppola is in total command of the filmmaking from the very first scene, a rowboat ride on a lake in the blackest of nights (one of the benefits of low budget shooting was the lack of lights for many of the film's night scenes-all of which aid the film's atmosphere tremendously for appearing to be solid BLACK.) The touches of an inventive filmmaker are already present: When a man's dead body is tossed overboard, so is his transistor radio which continues to gargle rock and roll on its way to the bottom.

The central murder sequence, basically the film's "shower scene" is still one of the most atmospheric, poetic, and nightmarish horror set pieces ever photographed. It's derivative, but honestly scarier than anything in Psycho. When the conniving Louise (Luana Anders) strips down to her underwear to dive into a lake at night, Coppola designs the sequence for eroticism, poetic atmosphere, classic gothic creepiness and the revelation of a "double scare". Coppola's handling of the "double scare" is timed perfectly, shifting gears from the spooky to the shocking in just a few seconds. From the eerie image of a perfectly preserved dead little girl in an underwater grave memorial to Louise meeting a violent and painful death by ax on the shore above, the moments go off like firecrackers.

It must be added that Ronald Stein's very effective score and the photography of Charles Hannawalt contribute greatly to the film's overall effect. In fact, the film is so well made that it has withstood a public domain status which has condemned it to be seen in only the worst prints imaginable. I have never seen the film in any version that wasn't hit by a truck and it STILL works effectively. 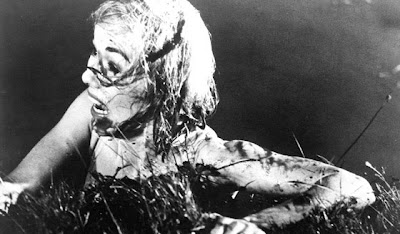 I watched the movie the other day, and I must said it is a scary scary movie, number 2 on my list after Exorcism.

Hello, I have browsed most of your posts. This post is probably where I got the most useful information for my research. Thanks for posting, maybe we can see more on this. Are you aware of any other websites on this subject. buy dvd the handmaid's tale season 1