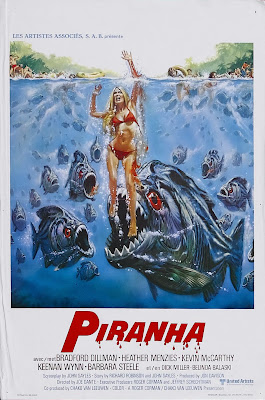 Look at that poster. If there was ever a poster that came closer to capturing the tone of a movie it's this one by artist John Solie. A sly parody of the Jaws poster, it has a look that evokes MAD Magazine with the goofy looking oversize Piranha and the odd margin jokes all over the image. The 1978 film was the solo debut of the very underrated director Joe Dante and was written by none other than John Sayles. On the surface, it was a familiar product for Roger Corman's New World Pictures-a knockoff of a big budget hit. But in actuality it was more of a mischievous poker faced parody of its bigger budgeted progenitor.

Opening just like Jaws with hiking teenagers going skinny dipping and getting skinned, the story establishes its "mad scientist" plot by having them sneak into a swimming pool at a private research facility. Turns out that the US government had a program called OPERATION RAZORTEETH which involved genetic engineering of "normal" Piranha in order for them to be able to survive in fresh water and be used in the rivers of Vietnam. Of course, these razorteethed fish are released into the local rivers and it becomes a race of time before kids at a summer camp and a lake resort get placed on the menu.

Featuring a great cast of B movie icons and Corman regulars, the film is an early example of using the conventions of casting in order to make a satirical point. Actors like Dick Miller, Kevin McCarthy, and Barbara Steele are really only there to remind you of the famous films they are known for and how the characters in those films connect to this one. Dante and Sayles have a great deal of fun with the fact that their story of government created killer fish is completely ridiculous. In jokes are everywhere but without any reduction of violence or horror. This is the completely unique genre that Dante and Sayles established here and perfected in their next collaboration, The Howling. Films which operate as parodies of both a specific film and genre as well as film conventions themselves but which also play as effective examples of those genres as well. It's a post modern way of having your cake and eating it too.
Posted by Brian at 6:59 AM

Though people haven't said great about this movie yet I decided to watch this movie and found an interesting option. I enjoyed this movie and I would say that its a one time watch.