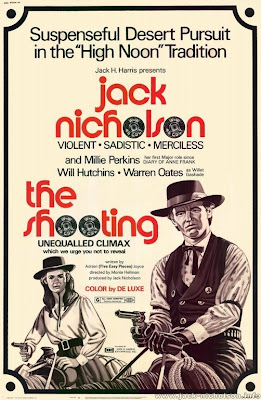 This nearly abstract existential western by Monte Hellman was made at the same time as the somewhat more conventional Ride in the Whirlwind. It was the usual Corman plan in which two similar films with interchangeable casts were shot back to back. Both films have their qualities, though I personally lean more towards this one simply because the film is so damn enigmatic. It's a film which finds a corner of your mind and stays there for a long time.

Warren Oates plays Will Gashade who, along with his simple minded sidekick Coley (Will Hutchins), agrees to guide a mysterious and cruel young woman (Millie Perkins) through some rough desert territory. Throughout their tension filled journey Gashade gets the feeling that they are being followed by a third party, someone the woman is aware of and is signaling from time to time. This turns out to be the brutal thug Billy Spear (Jack Nicholson). What these people want from Gashade and Coley is not known. They seem to have very clear objectives of where they want to go and how they want to get there. As their journey wears on, several of the horses die, the water supply runs out, Coley is left behind, and Gashade, aware that Billy intends to kill them, begins to execute a plan to get out of the situation.

This is about all the literal plot that exists onscreen. It's suggested that the events have something to do with Gashade's brother Coin, who may have been involved in the death of some "little person" in a nearby town. Whether this is a reference to a child is never made clear. At the end of the film the mysterious young woman seems to have reached her goal, firing her gun at a strange figure she clearly recognizes hiding up in the rocks. Gashade tries to stop her but she and the other man kill each other before he can do anything. The man on the rock is played by Warren Oates as well and when Oates as Gashade sees him, he calls out his brother's name over and over as the film ends, "Coin!".

Now whether this woman was out to kill Coin for revenge is open to much speculation. Perhaps Coin was involved in the death of the "little person" mentioned by Gashade in the beginning of the film. What is most intriguing about The Shooting is the constant sense of undefined menace throughout. The film has an otherwordly feel as though the action were taking place on the surface of the moon. Three lone people surrounded by vast areas of open space-it's an agoraphobic's nightmare. Like a Harold Pinter play, the excellent screenplay by Carole Eastman plays on ambiguity from all sides. The tension comes from each character trying to gain advantage over the other in some way. 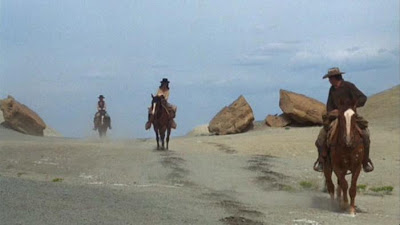 Visually, Hellman shoots the film in a very clean, spare manner. He makes excellent use of very short but quick tracking shots and fills the screen with open spaces which seem to be drowning his characters.

The climax is as puzzling as the weird freeze frame that ends Walter Hill's Southern Comfort but it doesn't come off as some kind of arty addendum since the whole film was designed around this mystery. We may not know the exact details of what went on among these 5 characters but it doesn't really matter. Just like a news story in which we are told what happened to who, where, when and how, the WHY is often something no one can understand. It's the mystery of human nature itself.